brew-cask provides a friendly homebrew-style CLI workflow for the administration of Mac applications distributed as binaries.

Apps via homebrew-cask get installed into /opt/homebrew-cask/Caskroom/ and symlinked to /Applications/ so it works just like any other apps.

It looks much better this way. 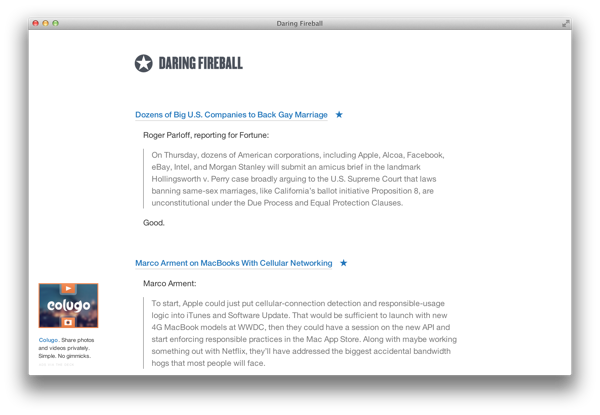 Nice and clean UI. More importantly, it’s not yet blacklisted by other websites.

An Alfred workflow as a lightweight window manager solution. Heck, it’s even more customisable than DoublePane but DoublePanel is more responsive. It takes Layouts a second or two to response to the hotkey.

Since TM 2 is Open Sourced, so why we (unregistered non-commercial users) need to pay for the license keys?

I do not remember paying for the license keys for any Open Sourced program in the last decade.

It seems to me that the Open Source tag is a ploy to ‘attract’ developers, however, keeping the revenue to the owner himself.

This guy has a wrong fundamental understanding about the word free. And as Allan has already pointed him at GNU philosophy but he seems to ignore and continue trolling everyone in the mailing list. And the best part is, he’s not just some undergrad. This guy is doing his PhD thesis using TM2!!

I can’t help myself but feel the need to quote this from GNU’s philosophy here again.

The word “free” has two legitimate general meanings; it can refer either to freedom or to price. When we speak of “free software”, we’re talking about freedom, not price. (Think of “free speech”, not “free beer”.) Specifically, it means that a user is free to run the program, change the program, and redistribute the program with or without changes.

A Proposal to A Better Format for Research Paper

This definitely is not going to work for the time being. The web isn’t intended for this kind of stuff because the paper won’t look the same cross-browsers.

PDF, on another hand, was designed to look exactly the same as the author intends. PDF wins right there.

Finally, I’m able to grab a generic TLD domain of my name. #winning