A curated list of awesome machine learning frameworks, libraries and software (by language). Inspired by awesome-php. Other awesome lists can be found in the awesome-awesomeness list.

Stumble upon this list when I was looking for some Julia’s libraries.

The idea is to lazy-load web fonts once everything else loaded completely, store them in localStorage to be used for subsequent pages. A cookie is used as a flag to check if the fonts are cached in localStorage.

There are something to note:

I did not write this code. This bit was taken from Smashing Magazine - source.

Consider the code snippet below:

When it comes to dealing with asynchronous in nodejs, we usually come down to 2 most popular options: callback and promise.

Callback is widely used but when we need 3 or more operations going in sequence, things are going to get ugly. Consider the following code snippet.

That is just one function with callback. Imagine this with 4 levels of callback. Welcome to CALLBACK HELL!!

What is a promise?

The core idea behind promises is that a promise represents the result of an asynchronous operation. A promise is in one of three different states:

Once a promise is fulfilled or rejected, it is immutable (i.e. it can never change again).

The most complete library for promise on Nodejs is Q.

I recently tumbled upon an error when trying to connect to SQL Server in nodejs using mssql package.

I have no problem connecting to a dev db server of mine, probably due to I don’t have any restriction/security setup on it. I only got this when connecting to a production server.

Problem lies in the default driver tedious used by mssql. Changing to tds fixes the problem.

I don’t actually understand the problem behind this so if anyone knows, please help explain it to me.

How to setup Sublime-IJulia with Sublime Text

I love Sublime Text. I prefer to do all of my development in Sublime Text if possible, especially when Julia Studio or Juno don’t offer much addtional features.

The instructions on GitHub repo is a bit confusing so I decided to rewrite it steps by steps how to set Sublime-IJulia up on OS X. I can’t say for other OS though.

I suppose that you have already had homebrew and julia installed (v0.3.3 as of this post) and add julia to PATH variable.

Follow the instruction from step 7 of this GitHub repo. There are a few things to note though:

That’s it. Follow the instructions carefully and it will work as expected.

A conversation with stranger

Stranger: So you’ve been living here for nine years? How come you don’t speak Thai?

Stranger: What do you do for a living?

me: I’m a programmer. I write softwares.

Stranger: Aha. So you’re a nerd? You don’t feel the need to talk to people.

Use this along with font-awesome icons and we have some nice social sharing buttons without tracking scripts or slowing down your website one bit.

As for the testing setup, I will compare the loading speed of two posts with text only.

2-3 seconds to load isn’t too bad itself but it’s definitely not good enough for me. My idea number would be something less than 1 second. I know that custom fonts come with the trade of loading speed but I would expect it to load faster than this, especially when they’re served by Google.

Stuff I have already tried:

Webpagetest gives my website A for everything except: First Byte Time (B) and Cache static content (C). Let’s break it down.

Apparently, the VPS my website is on is slow (which is expected). I can’t do much to enhance this either.

Webpagetest also complains about there’s no max-age or expires set in header on fonts.googleapi.com. I have no idea why Google didn’t set max-age or expires for this. Maybe someone with better understanding about this can help explaining to me.

As much as I would like to make my website load faster (I’m sucker for this kind of stuff), I either have to upgrade the VPS plan ($$$) or go with web safe fonts (Ewwwww!).

I guess I would have to settle with this for now. Hopefully, you don’t find this website too slow.

My blog is now using customized Shiori theme - a Bootstrap-based theme for jekyll by Elle Kasai.

The switching process is painless. I just have to copy my data over from old jekyll instance, tweak here and there a bit and git push. BAMM! The blog now has a shiny new modern look :) 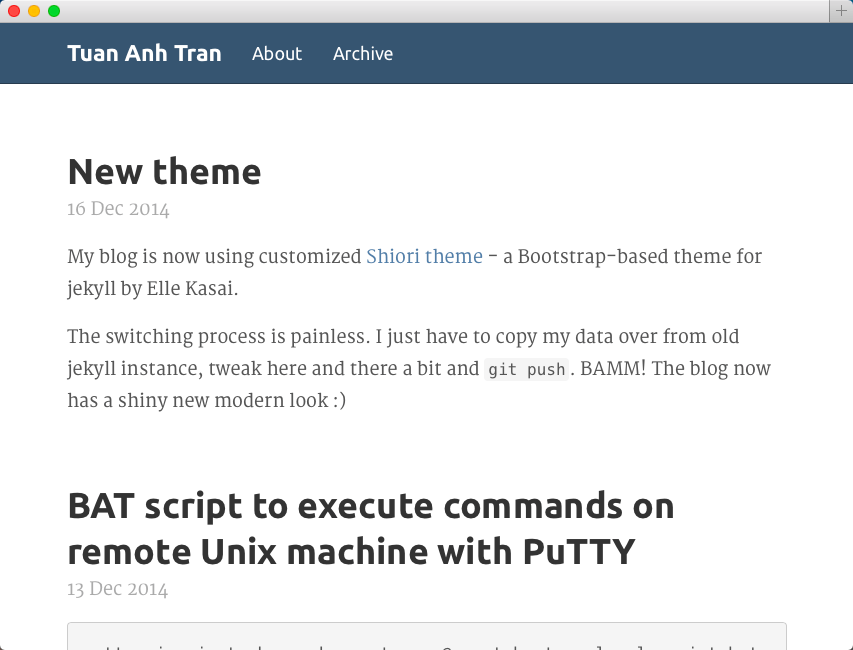 In the example above, I use public key authentication to authenticate and then execute the commands inside local_script.bat on the remote machine. Alternatively, you can use plink which is basically putty without the GUI part. All other options are basically the same.